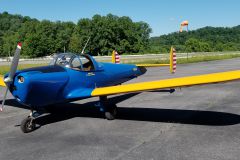 Bob Morris6 年前
I do not think that is an Apache, I believe it is an Aztec.
Report

sam kuminecz6 年前
PA-23 was the Apache, but the PA-23 was also the Aztec before becoming the PA-27
you can tell by the square shaped tail, while the Apache had a round tail
Report

Champdriver6 年前
PA 23 is a Piper's manufactures designation for both the Apache and the Aztec.

Then there is the Apache with the Geronimo conversion, it has 180 HP engines, sometimes with a longer nose and cowlings, and with a different squared tail.

The Aztec is a PA 23-250 with Lycoming O-540, 250 HP engines, longer cowlings and longer noses, later ones like in the photo had the latest pointed nose.
The plane in this photo is a really nice looking late model PA 23-250 Aztec.

PA 27 is merely an ICAO designation lumping all Apache's and Aztec's together for ATC purposes.

FA's software is easily confused when using PA 23 and PA 27 and randomly picks either Apache or Aztec out of a hat and lists that.

And this one has Piper's Tiger Shark nacelles too!
Report

sam kuminecz6 年前
Jim, what is a Apache Geronimo? ive seen one at 9G3 Akron,NY....its got a square tail I believe
Report

Champdriver6 年前
The Geronimo conversion came along in the mid-1960s. Despite the Piper Apache’s warts, or perhaps quite more accurately, because of them, the Apache was a prime candidate for a modification. In the never-ending search for more efficient methods of overcoming gravity, three partners from Seguin, Texas, came up with the brilliant idea that given 180-hp engines, a larger vertical stabilizer for additional rudder authority, a cleaner, extended, Twin Comanche-style nose (which can come complete with its own baggage compartment), Hoerner wingtips and a host of other aerodynamic improvements, the Apache could become the airplane that it should have been right from the beginning. The partners formed a company then known as Vetco, which later evolved to Seguin Aviation, and the Piper Apache Geronimo was launched.
Report