Paul Wisgerhof4 ヶ月ほど前
The DC-6B went out of production in 1958 with 286 built. This may have been one of the last.
Report

Alan Brown4 ヶ月ほど前
Thank you for this photo. It isn't often that you get to see the end of an era in aircraft flight and have a photo of it also.
Report 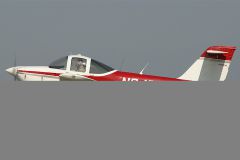 Chris Bryant4 ヶ月ほど前
Really nice shot.
I never realized how much of a cantilever the DC-6 had.
Report

a mentor4 ヶ月ほど前
@Chris Bryant; I believe you are referencing "dihedral"
"In aeronautics, dihedral is the angle between the left and right wings (or tail surfaces) of an aircraft." see https://en.wikipedia.org/wiki/Dihedral_(aeronautics)

A cantilever is a surface anchored at only one end while the other just hangs there in free space without support.
Report

bayou4 ヶ月ほど前
This picture makes my heart race! I was an aircraft maintainer in the USAF (72-92). Spent many days and nights with rag in hand wiping oil leaks! But she sure was a beauty, clean or dirty!
Report

Makes me think it is 1955 again
Report 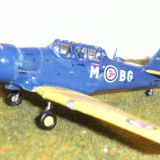 David Marshall4 ヶ月ほど前
Was this the DC6 Skymaster.
Report

Will Sutton4 ヶ月ほど前
With the Iditarod Campion and his dogs on board?!
Report

Ben Edwards4 ヶ月ほど前
N151,
Would you email me the full pixel file so I can print in large format?

Chuck Pergiel4 ヶ月ほど前
Looking at Google Maps, I cannot find a place that looks like this. There are some houses across the water from the north end of the north-south runway, but they are pretty far away. The ones in this photo look closer.
Report

Gavin Hughes4 ヶ月ほど前
Hi Chuck, the houses are over 4 km from the threshold, and judging only from what appears to be the photographer's position, over 7 km away. With a long tele lens the distance is compressed making the background look closer. My guess is the shot may have been taken with at least a 400 mm lens, quite possibly even longer.
Report

adelma4 ヶ月ほど前
Beautiful shot! She was built in 1958.

When I was in college I flew a couple of times on American DC-6B's coast to coast - LAX to LGA. The DC-6's had to stop at MDW. I later had one trip on a DC-7 - LAX to IDL non-stop in only 9 hours!
Report 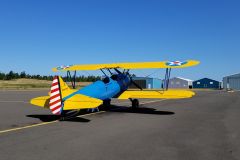 Kenneth Scott4 ヶ月ほど前
Just happened to have watched a video of this magnificent aircraft arriving, refueling, and departing Yellowknife on an episode of Mikey McBryan's (Buffalo Airways) PLANE SAVERS from 01 June 2020. Going to a good home. Grew up watching the military versions back in the day.
Report

Robert Ferguson4 ヶ月ほど前
There are still quite a few of these great airplanes flying all over Alaska with Everts Air Cargo. The lots around their Fairbanks facility have more than 20 in storage along with the 10 or so that still fly.
Report

James Driskell4 ヶ月ほど前
The High and the Mighty flew DC-4s, not DC-6s!
Report

Robert Vik4 ヶ月ほど前
Great photo. That route is almost 3500 miles. Is that really in the unrefueled range of the DC-6? Good grief.
Report

In ground school, the instructor said that 'the plane WANTS to fly, too many pilots fight it into the ground'. We went through several cases he had, and so many were incidents where he said the pilot(s) overreacted, and all they had to do was to 'let go of the yoke'.

The dihedral angles are there to equalize the lift on each wing, and as long as you aren't 'outside of the envelope', letting go of the yoke *could* allow the plane to center itself in the lift from both wings. He said it was somewhat of an oversimplification, but, unless the plane was already in a really bad position, or in serious weather, most incidents would recover fine of the pilot(s) just trusted the plane. It wants to fly. It's designed to fly. It's very comforting to know that, and to see the wings lift so much after takeoff. It's also funny to hear people, surprised at the flex of the wings, as they see the wings flexing upwards. Hearing people comment that 'those wings sure are flexing quite a bit. Are we safe?' Yeah, usually. Sometimes they flap like a bird! :-D

Thank Ford for physics. If you violate those laws, the penalties are pretty harsh. Cheers!
Report

Barry Maurer3 ヶ月ほど前
...those were the days, no "Bitching Betty" telling you to wipe your nose before lowering the gear..the only system control computers on board belonged the folk in the pointy end ;0)
Report